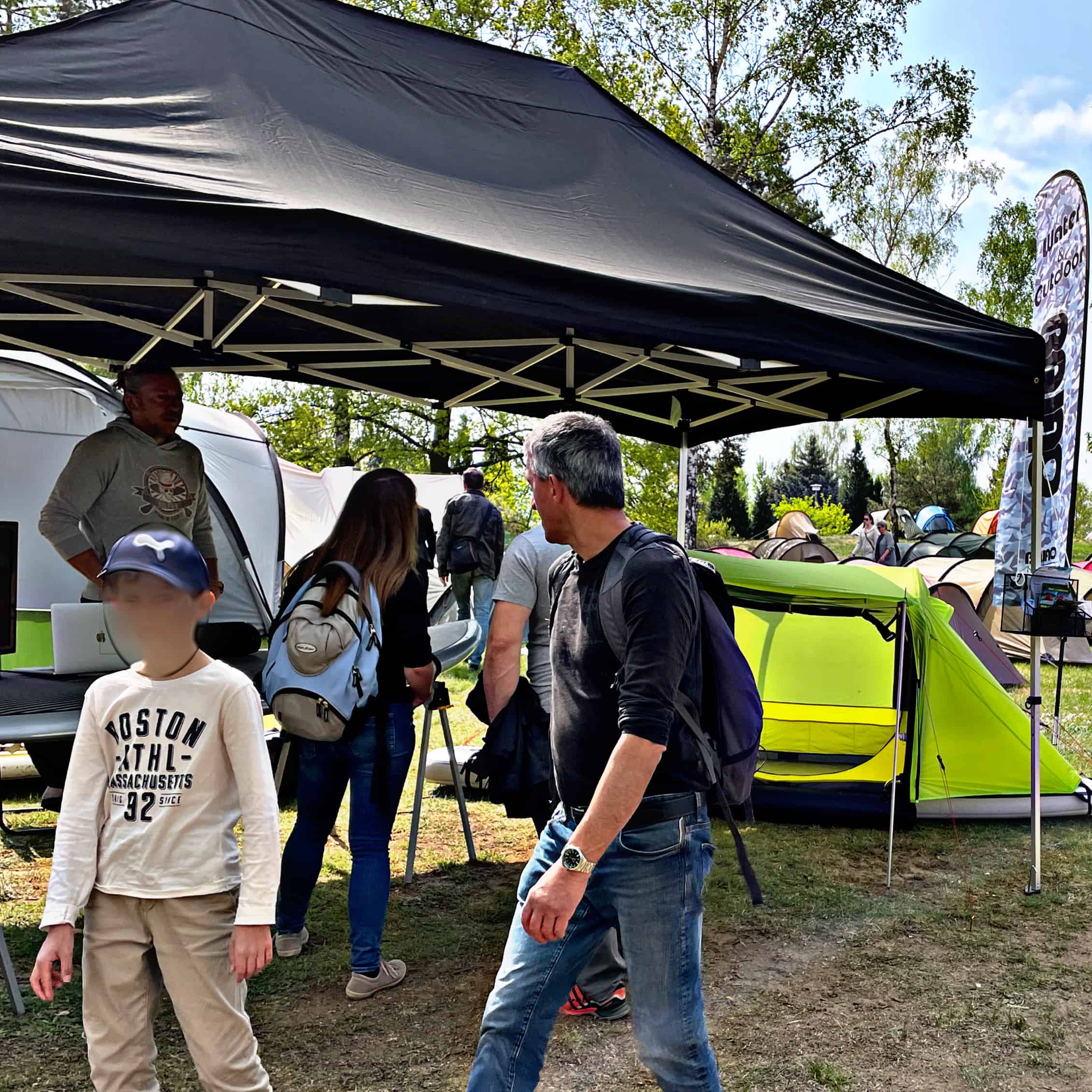 Knives with fire steel, breathable outdoor pants and heavy hiking boots, all things that you rarely got to see as a surfer at events. It was a bit strange when I came to our first of five Globetrotter outdoor test festivals in Frankfurt to introduce our BAJAO Cabin to the general public.
However, it quickly became apparent that I was an alien on the event grounds in a surf poncho and flip-flops. Especially since April was still coming up with sleet and stronger gusts of wind. Rarely have I wished more ardently for trekking pants and sturdy footwear. But you have to fulfill clichés and that includes a rusty van and neoprene instead of softshell.

The stand was set up relatively quickly and our exhibits put in scene. The surrounding exhibitors eyed both me and our products suspiciously. In between the persistent gusts of wind, I kept hearing snatches of words: “He’s not serious”, “They never sleep on the water with that” or “There’s nothing that doesn’t exist”. This promised to be a fun weekend.

Butt-bombing into a grease spot

On the first evening, some exhibitors and Globetrotter employees met around the campfire and one chatted with the person next to him. In my case, there was a pleasant-looking gentleman sitting there who asked me, “Globetrotter or exhibitor?” “Exhibitor,” I replied proudly. “We make inflatable tents that add a cabin to your SUP.” “What do you need that for?” the gentleman asked, puzzled but interested. I thought back to our elevator pitch that we had rehearsed over and over again – Banging out the most important info in a nutshell monologue to your interviewer, I can do that.
So rattle off all the key benefits: Nobody steals your board when you sleep on it, you save on luggage because you don’t need a sleeping pad, and anyway, no sleeping pad insulates as well as 15cm of iSUP blahblahblah… Of course, politeness dictated that I also ask about its field of application. “And you? What do you do?” “I sell sleeping mats” – silence…
Butt-bombing into a grease spot from a high-powered elevator pitch, I can do that too.

Fortunately, Dirk, the name of the nice person sitting next to me, didn’t take offense at my faux pas, but was even interested in BAJAO. Not so bad, these outdoor people, I thought. And it even got better and better. We were suddenly accepted in the ranks of the outdoor brands.

The intersection between outdoor and surf

The first day at the Outdoor Testival was overwhelming. I had not hoped for so much encouragement from visitors and exhibitors, even in my wildest dreams. Among them was also constructive criticism, for example for the color scheme. It should be a more muted green. Our new production pattern was already very eye-catching. But for the most part, the reactions of the visitors were always similar: People strolled past our booth, looking out of the corner of their eye. Stopping and taking a closer look. This was usually followed by astonished laughter, photos taken surreptitiously with the cell phone and numerous questions. Who came up with this? Is this really meant for spending the night on the water? Won’t it tip you over? The reactions are the same at all the venues. The overwhelmingly positive feedback is also the same.

After having exhibited at three outdoor events by now, we can claim: There is an intersection between outdoor and SUP or surf. And it is bigger than expected. The desire for adventure on your own doorstep is huge. We have the right solution for it.